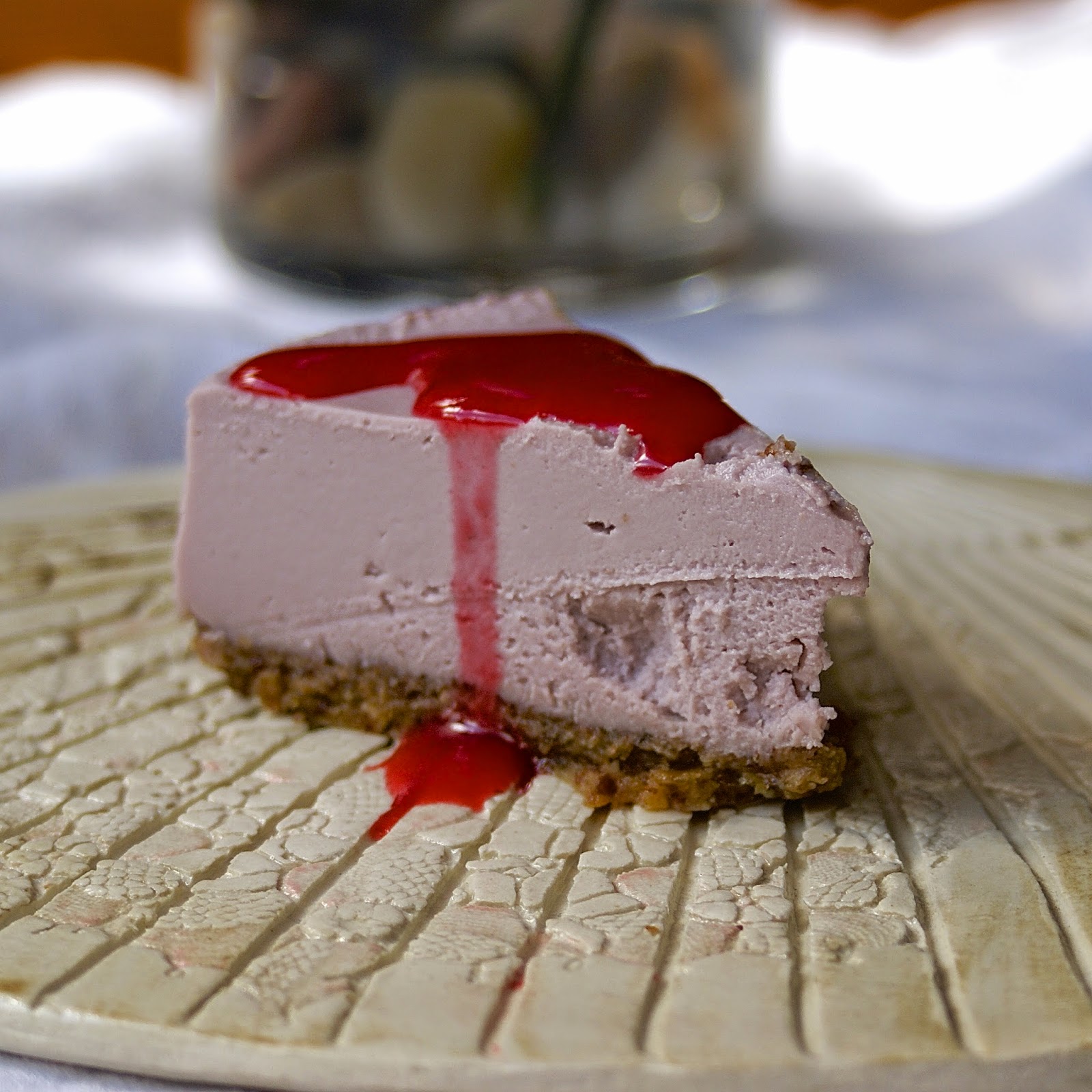 Here’s a little slice of heaven.  I made this for my birthday last week, and it came out amazing! The story behind me wanting a raw raspberry cheesecake for my birthday is simple.  When I was in San Francisco last August, I stumbled upon a restaurant called The Plant and fell in love with their version of a raw raspberry cheesecake.  I had to have it every night.  You might call it an obsession; I like to think of it as a food love affair.  One which I was reunited with through this decedent dessert!

Raw you say?  Well, yes.  This cake is made without baking.  It actually contains no cheese.  Or refined sugar.  Or most of the other ingredients you would expect to find in a cheesecake.  Confused?

Pureed cashews along with coconut oil make up the filling for this dreamy slice, while it is lightly sweetened with honey and atop a crust of walnuts and dates.  While it sounds too good to be true, trust me, it’s the real deal!  It has the dense, creamy, cheesecake-ish feel and is every bit as rich and decedent.  The filling contains the perfect amount of fresh raspberry flavor while crust tastes like an oatmeal cookie.  Really, really, good stuff. 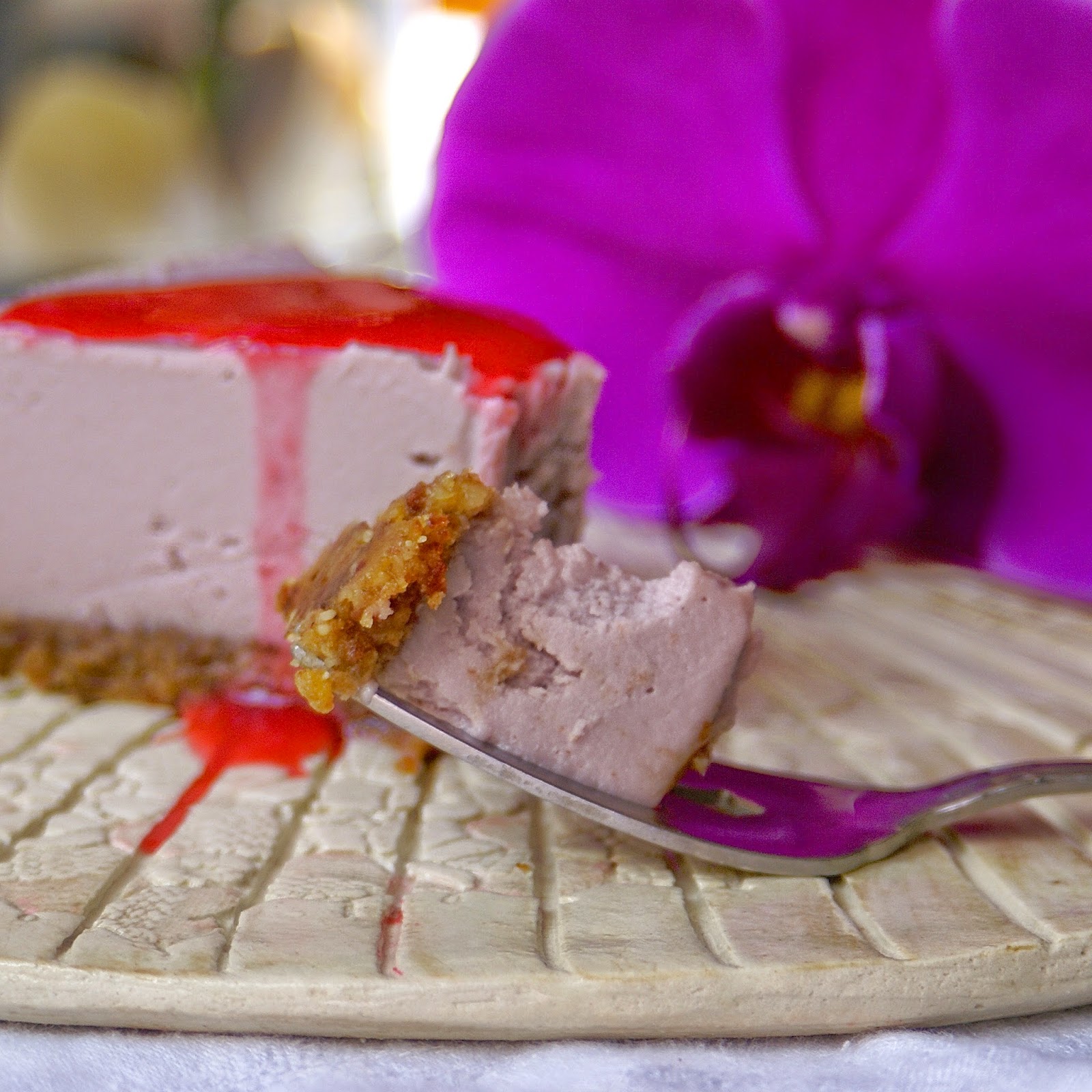 Although I was quite full when dessert rolled around on my birthday, I easily ate a slice of this and had to exemplify some serious self-control not to gobble down another two.  It was a huge hit and I will defiantly be making it again!  Although,  I might wait until next summer when raspberries are in season and don’t cost a fortune.  I’m already dreaming up a raw pumpkin cheesecake for the fall, maybe even a raw apple cheesecake.  I know, these are exciting times 😛

I drizzled some raspberry puree on top to enhance the raspberry flavor, which is totally optional. Originally I had planned on making a raw chocolate syrup to put on top, but that changed when I had the largest (chocolate) peanut butter dream smoothie I have ever the afternoon of my birthday.  But I digress. The point here is, no matter how you eat this cheesecake, it is delicious.  You can freeze the leftovers by separating the remaining slices with wax paper and putting them in an air-tight container. They will keep for a awhile in the freezer, and when pre-sliced it is easy to grab a piece when the craving hits without eating the entire thing.

If you love this cheesecake, make sure to check out my chocolate lover’s cheesecake.  It’s death by chocolate…in raw cheesecake form.

Directions:
1.  Line a the bottom of a 6″ cake pan with parchment paper and grease the entire pan with coconut oil.  Alternatively you can just grease a 6″ springform pan.
2.  In the base of a food processor, pulse the walnuts until they resemble a coarse flour.  With the food processor running, add the dates one at a time until everything is well combined and the mixture sticks together when pressed between two fingers.  You can use a blender here as well, I just find it easier to do this step in a food processor.
3.  Press the crust mixture evenly into the bottom of the prepared pan.
4.  Add the cashews, coconut oil,  raspberry puree, honey, lemon juice, and vanilla to the base of a high-speed blender.  Blend starting on a low speed, gradually increasing the speed.  Continue blending until a velvety-smooth texture is achieved.  It should be the consistency of slightly melted soft-serve ice cream.
5.  Pour the filling mixture on top of the crust and gently smooth out the top with a spatula.  Cover and place in the freezer for at least 5 hours before serving.  I find it best if you make this the day before and allow it to sit overnight and chill.

Take the cheesecake out 30 minutes before serving.  If you are using a cake pan, simply slide a knife around the sides of the pan after letting it sit out for 30 minutes, then flip the pan over onto a plate. Now the cheesecake will be upside-down so gently lay another plate on top of the crust and flip it right-side up.