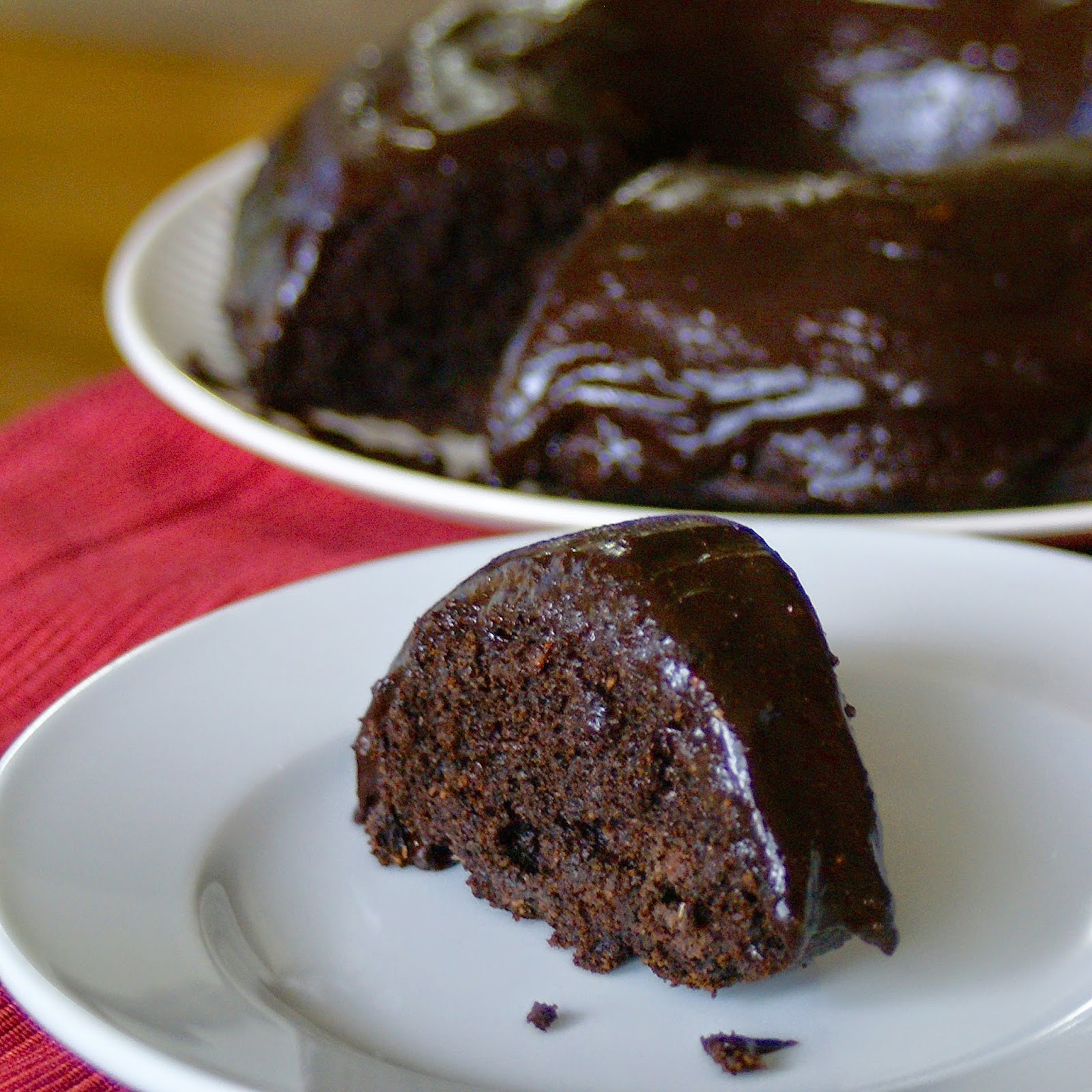 Nick’s birthday was the 21st, so I got to baking in the kitchen to make him the perfect cake.  I wanted a cake that said “I love you to the moon and back”.  I guess I could have written that on a standard sheet cake, but that is totally not my style.  Also most sheet cakes are severely lacking chocolate while chock full of all sorts of processed sugars, flours, and chemicals.  I sought a chocolate cake that was INTENSELY chocolate and made of all sorts of Margaret approved ingredients.  I wound up with a a moist, almost brownie-like, whole-wheat, avocado-infused bunt cake frosted topped with a chocolate almond “buttercream” (without the butter). 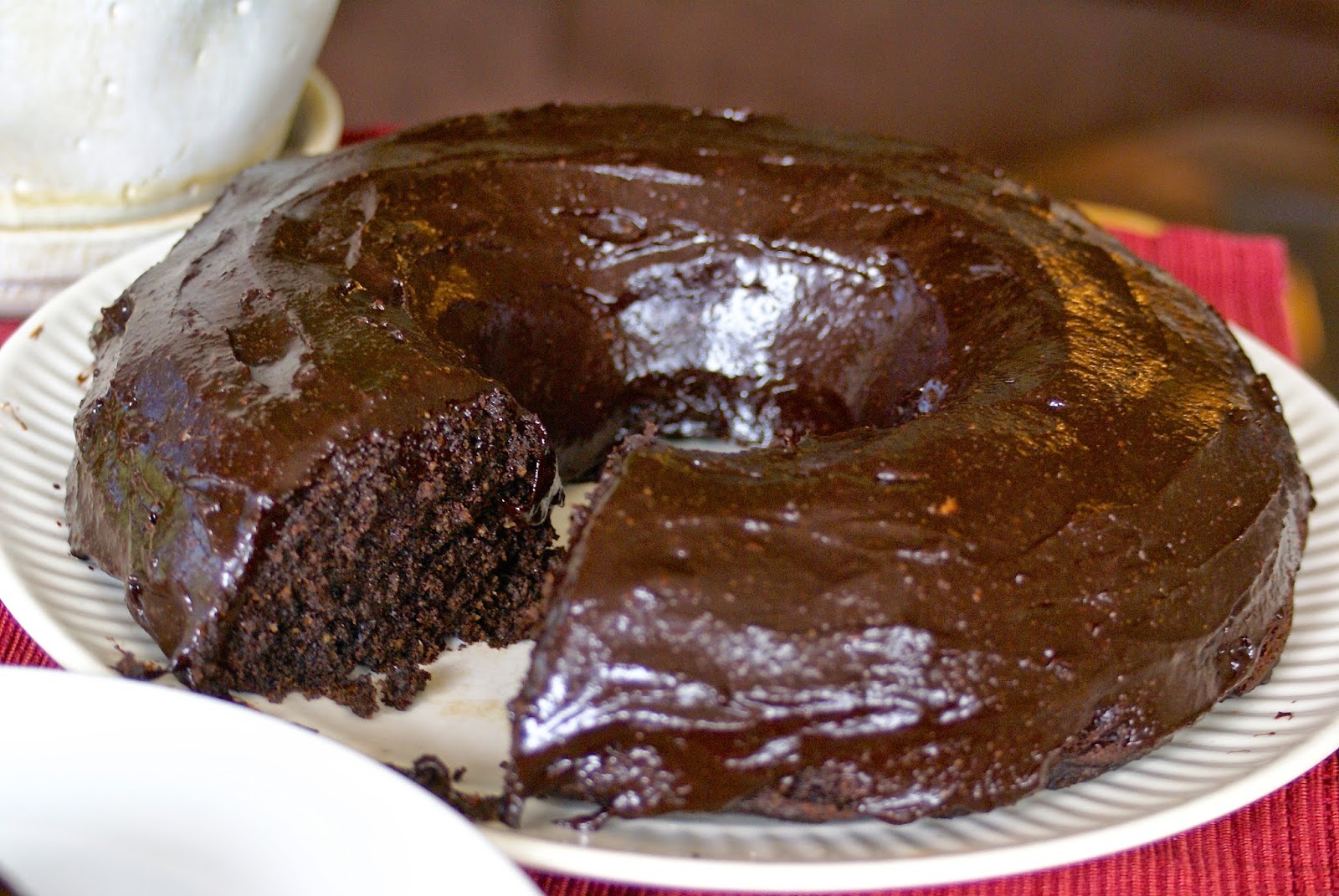 If you are thinking “yuck, avocado?!”, I’m telling you to reserve judgement until you take a bite of this bit of heaven.  You cannot detect avocado at all.  All you taste is a moist, extremely satisfying, dark chocolate cake that might be the best chocolate cake you’ve ever had.  To make this truly a midnight dark chocolate cake, I used coffee to intensify the chocolate taste and added a touch of cinnamon and ginger to accent the overall flavor.  Delicious.  And as far as the frosting is concerned, you don’t need to use butter and powdered sugar to make a good frosting.  Maple syrup, almond butter and cacao powder make a mean buttercream.  I had to resist licking half of the frosting from the mixing bowl. Maybe that’s why there is such a thin layer on the cake, opps!  Luckily Nick doesn’t like a lot of frosting on cake. 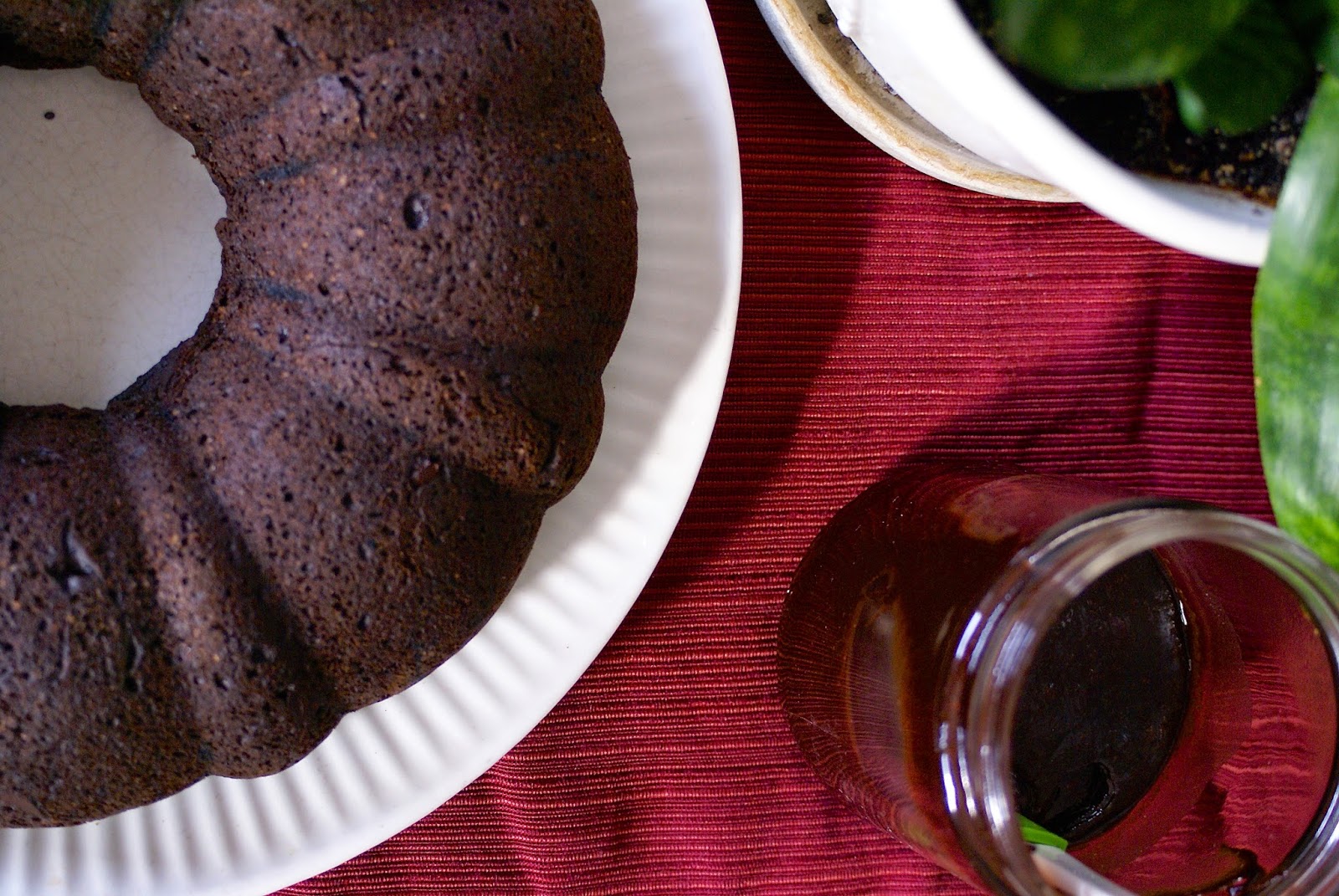 I’m posting this recipe late tonight because I’m off to the airport tomorrow morning.  Nick’s parents are moving to Florida, and we are headed down to help with the move.  I have a batch of hemp protein bars and raw brownies for the trip, and if we didn’t polish this cake off in the last two days it would be coming to Florida as well 🙂 I’ll be back late Monday, so enjoy your Memorial day and be sure to check back Tuesday for a new post.  I sprouted lentils and made some scrumptious sprouted lentil turmeric burgers that you don’t want to miss!

Directions:
1.  Preheat the oven to 350 F.  Generously grease a bunt pan, or two 6″ cake pans.  Whisk together the flour, cocoa powder, baking soda, salt, cinnamon, and ginger.
2.  Add the coconut oil, dark cocoa powder, and coconut nectar to the hot coffee.  Stir well.
3.  Using a hand held blender, beat the mashed avocado, coconut nectar, and vanilla extract until smooth.  Add the coffee mixture and beat well.
4.  Slowly beat the dry ingredients into the wet ones in 3 batches, alternating with a tablespoon of almond milk after each addition of dry ingredients.  The batter should be fairly thick, but if it is too thick, add another tablespoon or two of almond milk (I used about 1/4 a cup of milk).
5.  Scrape the batter into the prepared pan(s), and bake for 40-45 minutes if making a bunt cake and 25-30 if making two 6″ cakes.  Let cool completely in the pan(s) before removing.  Frost with chocolate non-buttercream frosting (recipe follows). 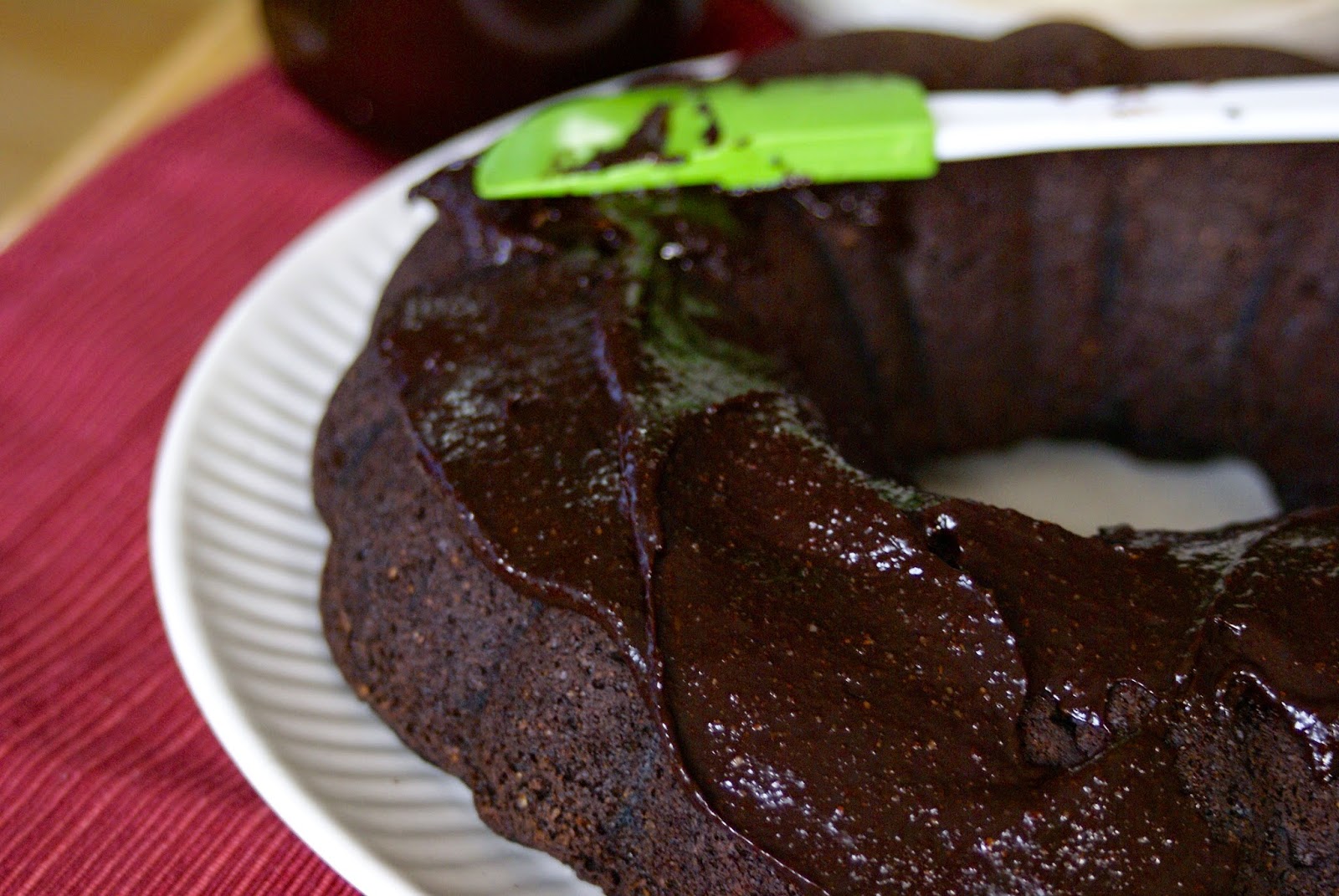 Directions:
Heat the almond butter and maple syrup until they are warm.  Using a whisk, stir in the coconut oil, vanilla extract, and cinnamon.  Slowly add the cacao powder until the frosting is nice and thick, yet still spreadable.  You can let it set in the fridge for 10-15 minutes to thicken before frosting. 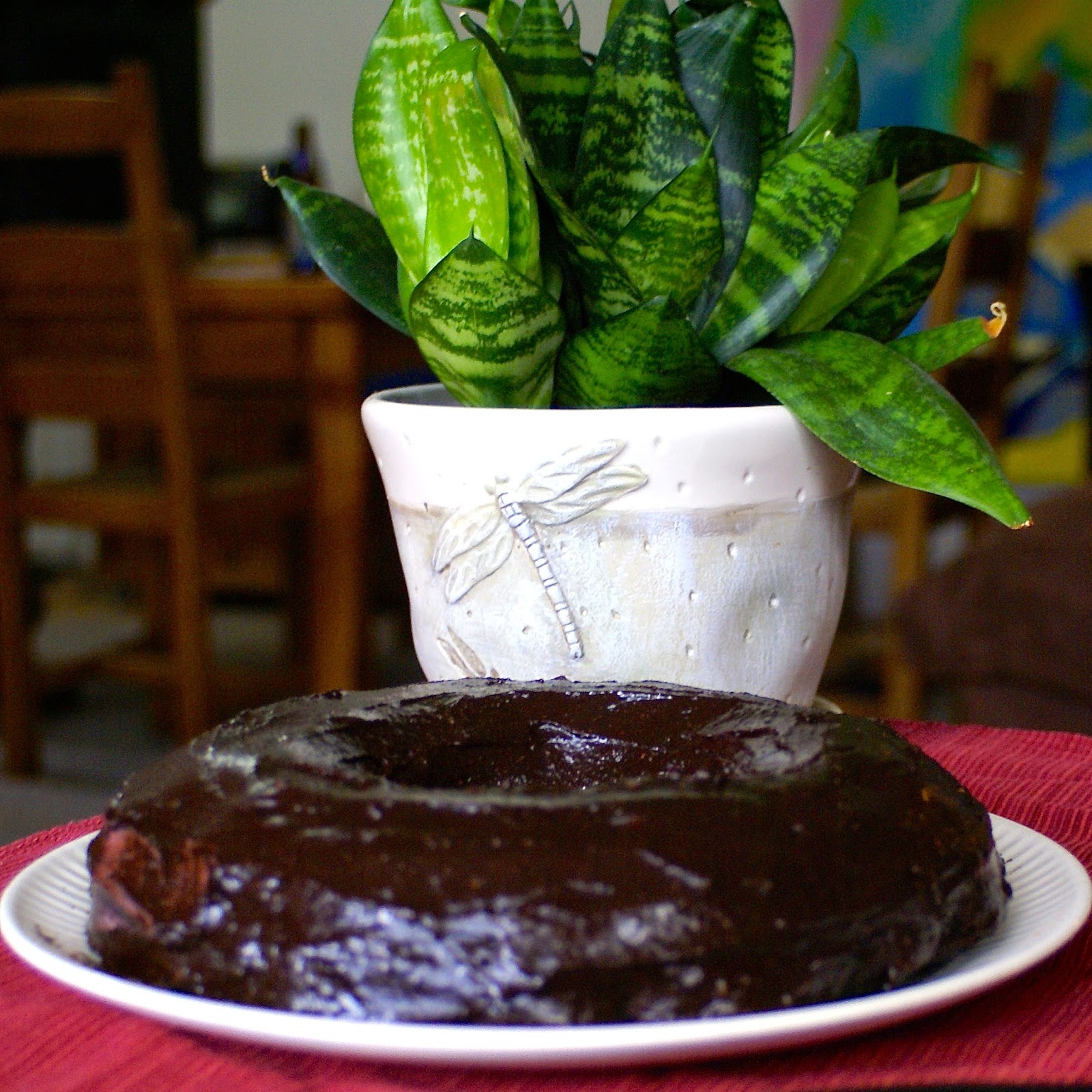