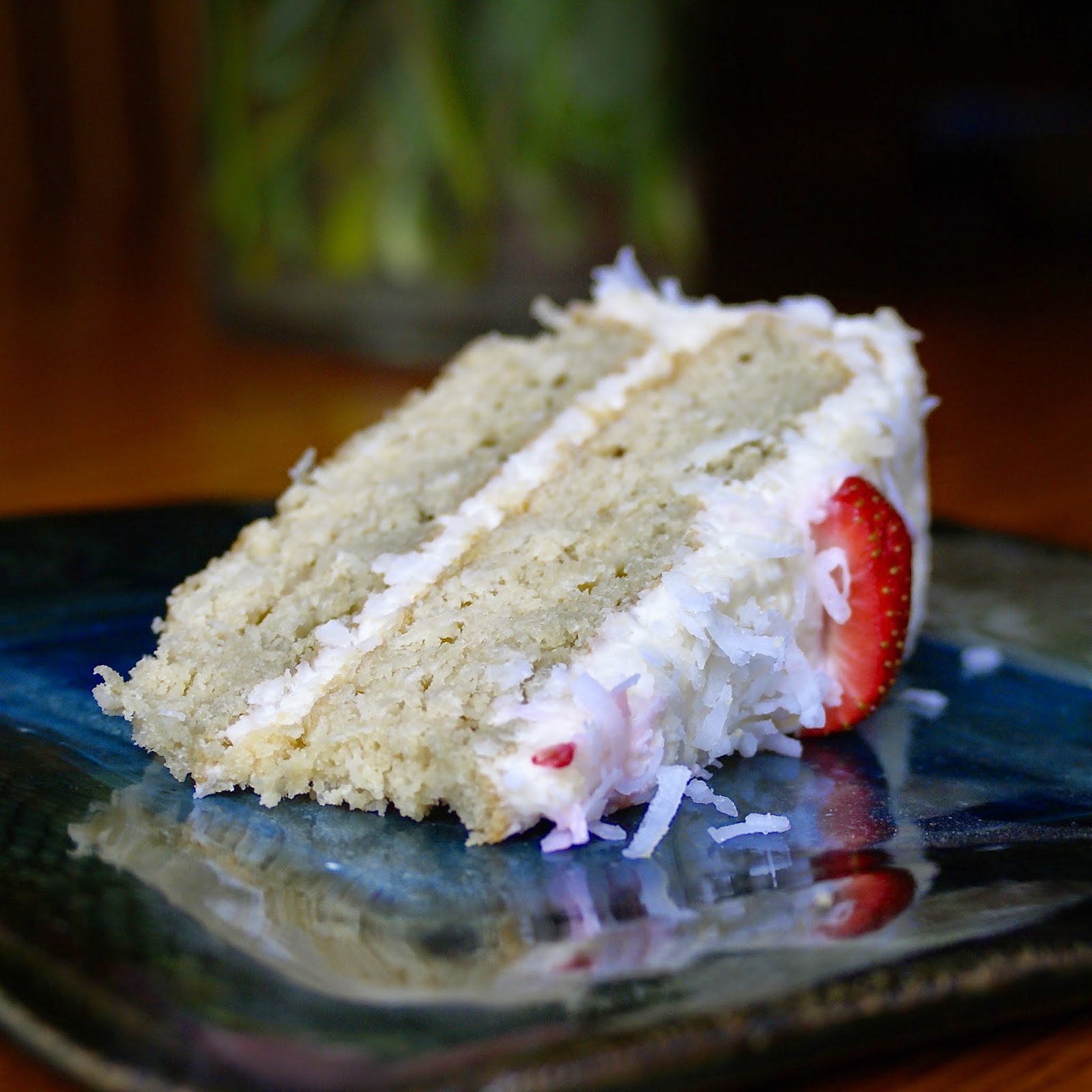 A week ago today was my grandma’s 92 birthday!  I sure do hope I have her good genes because she is supernanny.  At 92 she goes to her exercise class, has lunch with her friends, sings with a senior group that preforms at hospitals/nursing homes and always has a smile on her face and positive attitude.  Basically, my grandma is a rockstar.  And oh boy does she love her sweets! 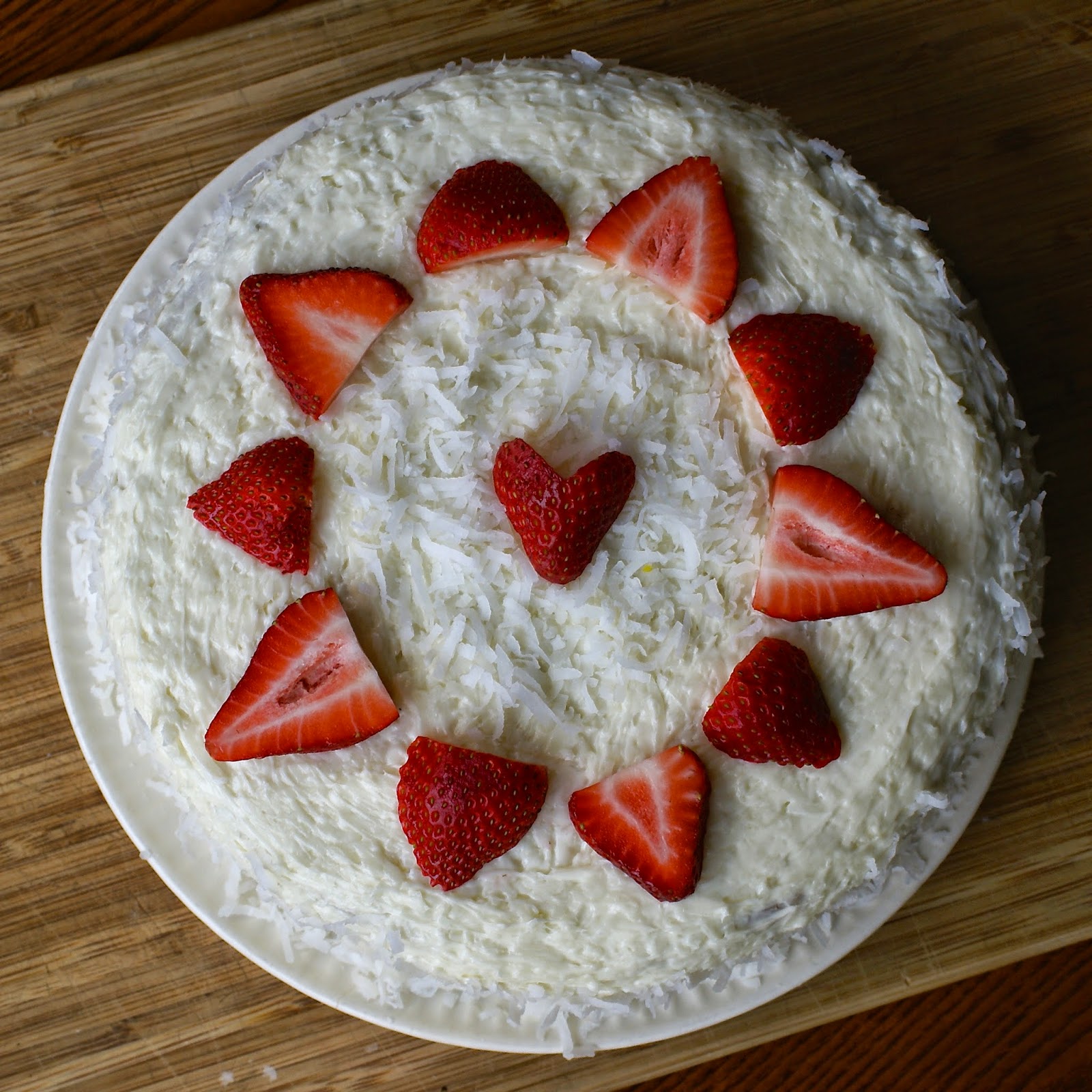 Give nanny anything sweet, creamy, and fruity and she is one happy lady!  Obviously dessert is her favorite part of any dinner, so her birthday dessert had to be extra special.  This might surprise you, but I am the designated family baker.  Shocker right?! 😉 So I set out to make all nanny’s dessert dreams come true in the form of a coconut cake.

For the past few months my family has been obsessing about coconut cakes.  They have tried them from many different places, stacking up their favorites and always craving the most perfect, moist, coconut-y bite.  I knew I had big shoes to fill and didn’t want to disappoint!  Now I never tried any of the coconut cakes my family bought because they were so not my type.  Flour ridden, refined sugar and fat ladened cakes are not my thing.  I needed to make a cake that would top all those cakes, Margaret style. 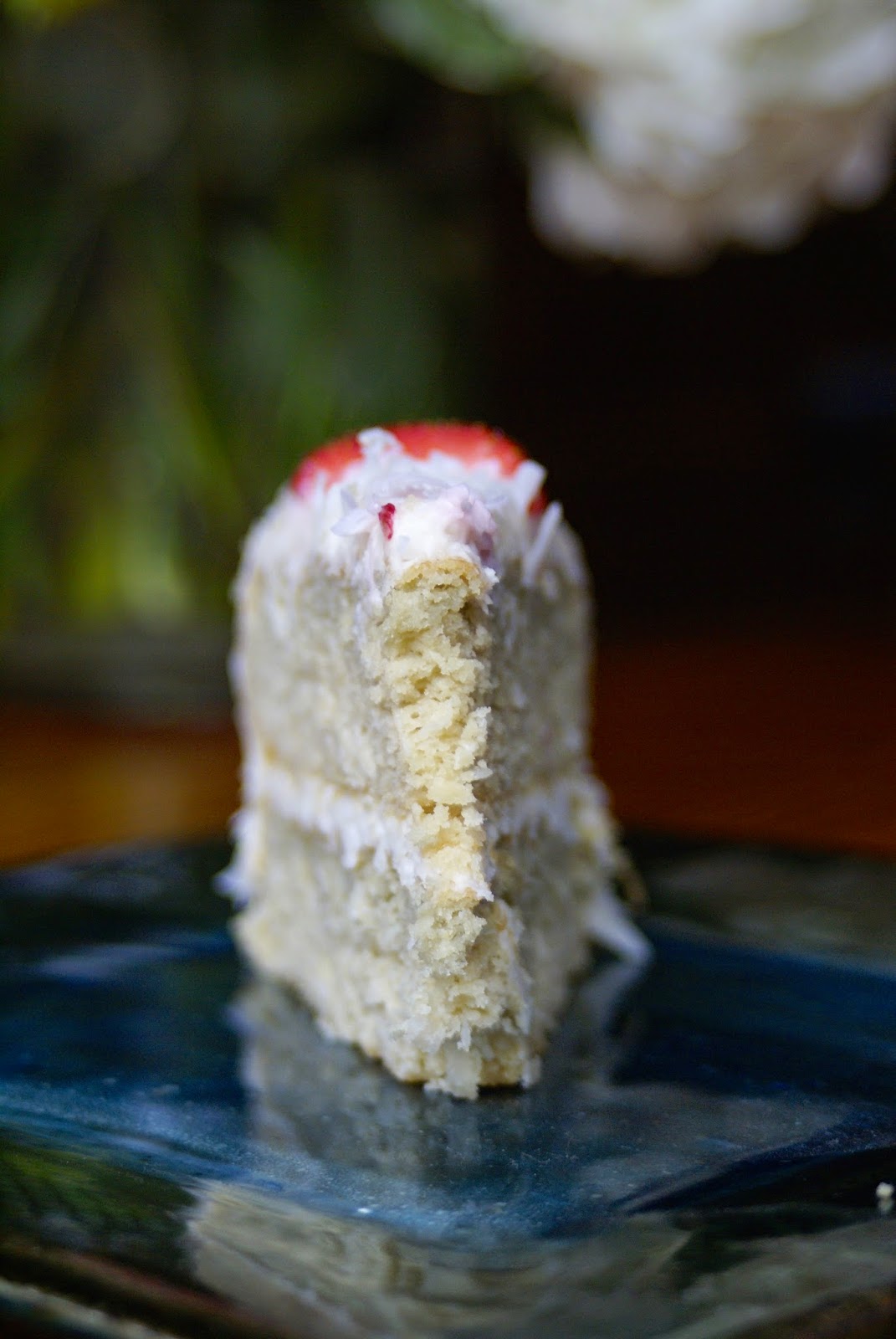 So I got to work in the kitchen.  I grabbed coconut flour, coconut sugar, coconut oil, coconut pulp (remember I told you to save the pulp when making coconut milk?!), and shredded coconut.  As this is a coconut cake, I decided to make it entirely out of various forms of coconut.  Because that’s smart!

It turned out fantastic.  This sky-high double decker cake smells heavenly in the oven and is a show-stopper once frosted.  Spread the word…you don’t need to use grains to have an amazing cake!  All the layers of coconut add a depth of coconut flavor that you can’t achieve any other way.  I whipped up a coconut cream cheese frosting to top this cake (because my grandma LOVES cream cheese), however you could use whipped coconut cream to keep this cake 100% coconut friendly 🙂 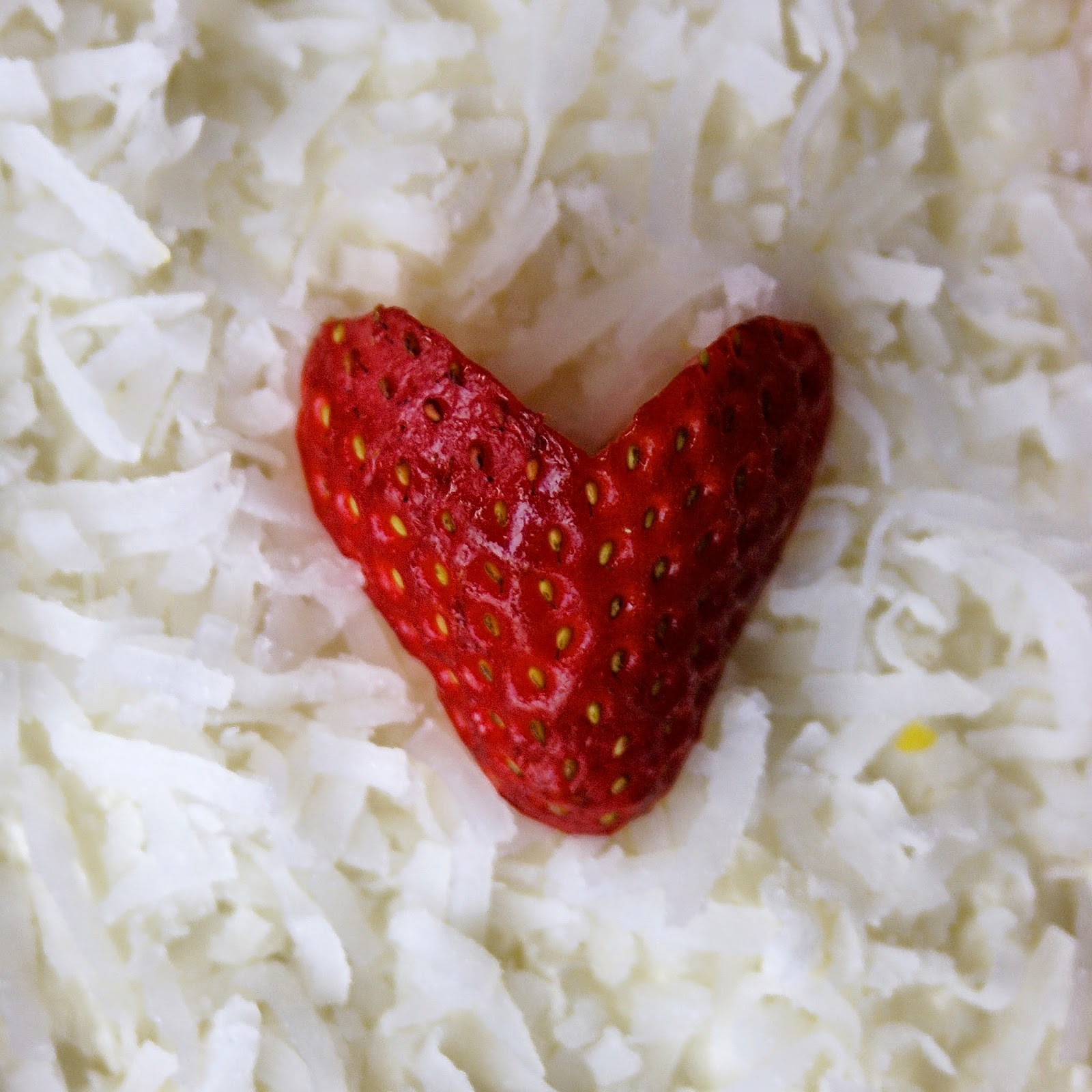 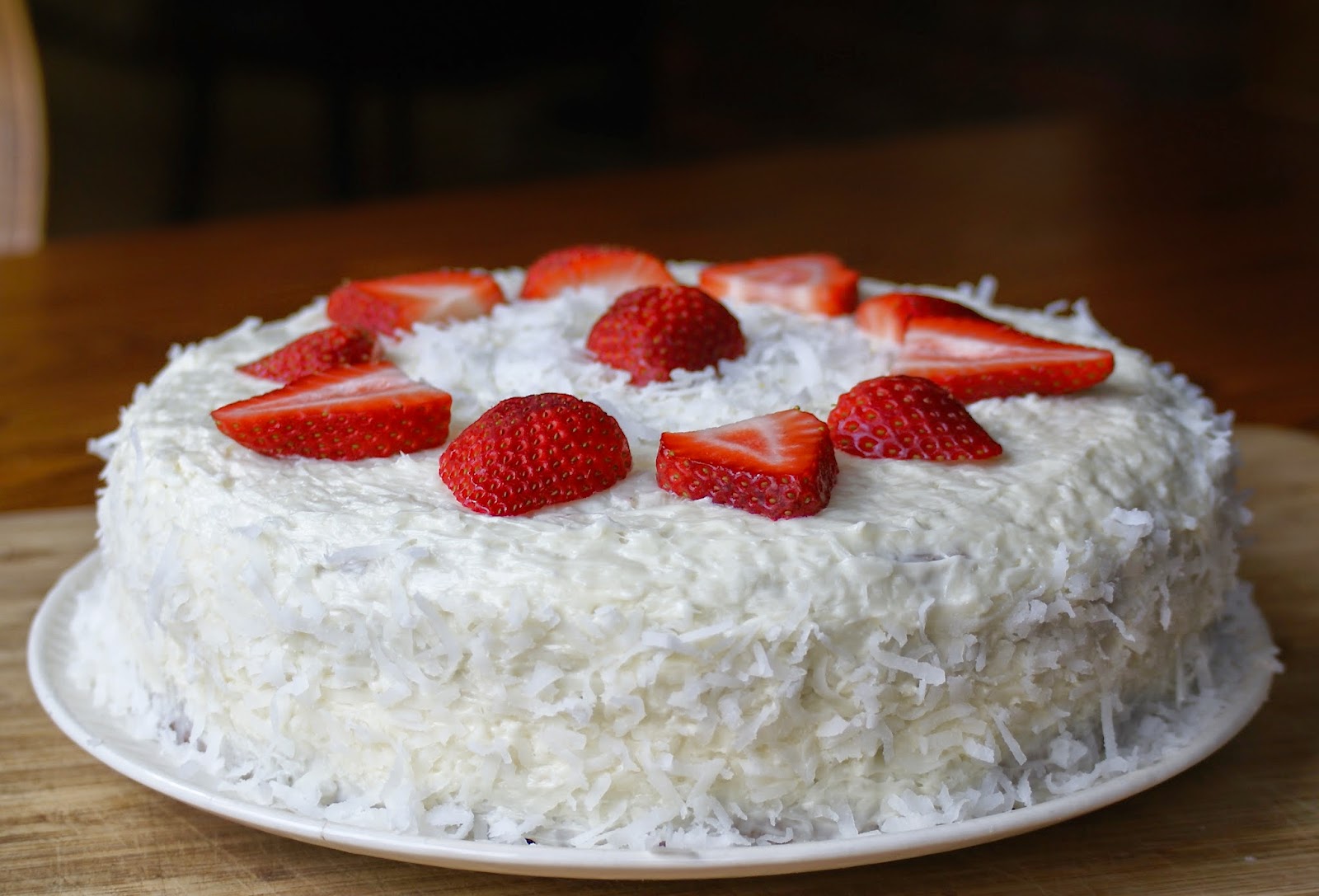 The only regret I have with this cake was not adding a layer of sliced strawberries in the center.  The berry-coconut combination was wonderful.  Nick said he wanted every inch of the cake covered in strawberries – maybe I’ll even try blending some strawberries in the frosting next time!  But most importantly, my grandma LOVED it.  That was really the icing on the cake for me.  She ate it with a big smile, and I knew that she appreciated my gift.  Nothing quite says “I love you” like homemade goodies.  People say the way to a man’s heart is through his stomach; while that may be true, I would rephrase that to read “the way to ANYONE’S stomach is through food”.  Chicks like good grub as well!

Overall, this is a super moist coconut cake that is much better than anything you can buy at a bakery. So get in the kitchen, put away the flour and sugar, and get baking!

*you can probably replace this with 1/3 cup yogurt, but seriously suck it up and make coconut milk!  It’s beyond delicious and has about a million uses.

Directions:
1.  Preheat the oven to 325 F.  Line two 9″ pans with parchment paper and grease with coconut oil.
2.  In a large bowl beat the eggs, using a hand-held beater or stand mixer, until they begin to foam (about a minute).  Add the coconut sugar and beat another 30 seconds.
3.  Add the coconut oil, coconut pulp, vanilla, and lemon zest.  Beat until combined.  Sift in the coconut flour and add the salt and baking soda.  Beat well, until the batter starts to thicken.  Fold the shredded coconut in.
4.  Divide the batter evenly between the two pans and gently spread out so it is evenly distributed. Bake 35-40 minutes, or until a toothpick inserted in the center comes out clean.  Allow to cool for at least 30 minutes before removing from the pan.

Directions:
Cream the cream cheese and pasture raised butter in the base of a stand mixer or using a hand held beater until light and fluffy, about a minute.  Add the maple syrup and vanilla extract and whip another 30 seconds.  Mix in the coconut. 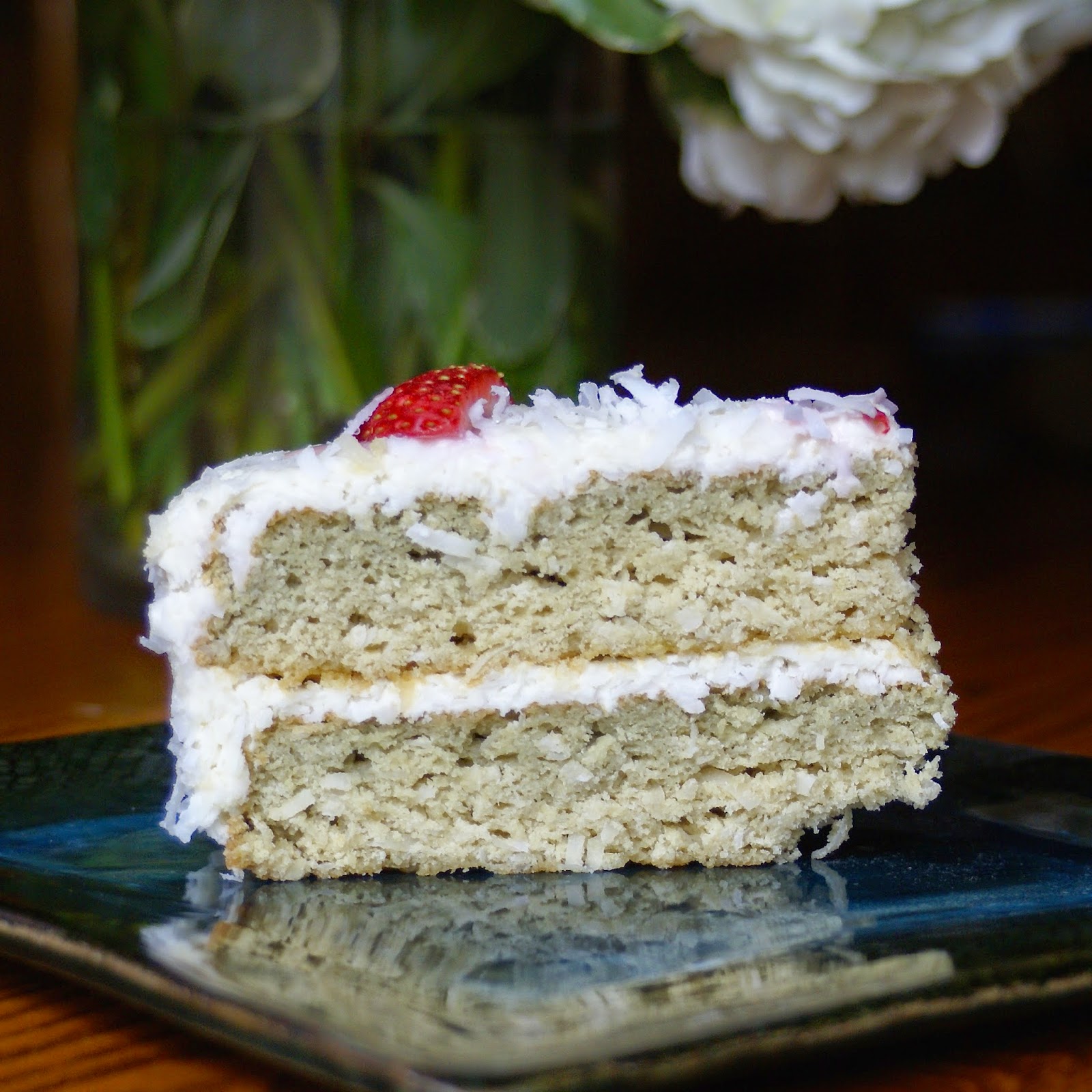